Trump Triggers Jimmy Kimmel: ‘You Stop Being Terrible, We’ll Stop Pointing It Out’

ABC late-night host Jimmy Kimmel went after President Donald Trump on Wednesday, after Trump pointed out how late-night comedy has now become “totally one-sided” and full of “hatred” for him and his administration.

ICYMI, Season 23 of The Bachelor wrapped Tuesday night after the former NFL athlete broke all of show’s rules — and broke up with any other remaining contestants — and defied the odds to win over the California native’s heart.

The lovebirds stopped by Jimmy Kimmel Live for their official debut as a couple, and they looked soo in love, TBH!

Related: Here’s How Colton Underwood’s Season Of ‘The Bachelor’ Ended!

Jimmy starts by taking things back a bit to the earlier moments in the couple’s relationship, and asks Colton when he knew that the 23-year-old was the one.

Underwood makes it clear that he really fell in love with Cassie in Singapore, somewhere around week four in the show’s broadcasted weekly timeline. Which means he definitely meant what he said during their previous painful breakup, about thinking of Randolph while he was with other women. Week four is pretty early, y’all!

So, what are they now? Kimmel throws out the terms, “Boyfriend and girlfriend? Lovers? Engaged?”, searching for more clarity since the two have been very reluctant to officially label their relationship.

The pair shyly smiles and laughs through their response of being a step above exclusively dating, but also just a small step beneath being engaged. Colton answers, “Lovers? Yeah… boyfriend and girlfriend? Future wife? I don’t know…” much to the crowd’s delight.

Hilariously enough, Cassie asks what’s the middle ground between boyfriend and girlfriend, and husband and wife?

It’s fiancee. Ya know, the one thing you didn’t want to be? LOLz…

Kimmel moves on, and tries his best to do what franchise host Chris Harrison couldn’t, and try to get a direct answer about what exactly happened in the Fantasy Suite.

Colton continues to keep it classy and fields that question with a very Bachelor-esque answer:

“Well to be honest, heading into that Fantasy Suite, I wasn’t even thinking about that. I was just ready to fight for our relationship.”

Okay, okay, Colton. We get it. We will (hopefully) stop asking about your virginity now!

What was more surprising and interesting to hear than the rehashed conversation about the lead’s sex life is the fact that he watches earlier episodes of his season with his current girlfriend’s family!

Wait, what?! Like with the whole family? Mom and Dad included?

As we previously wrote, the leading lady’s father Matt Randolph was pretty adamant about his daughter slowing things down with Colton, and even flew to Portugal to stop her from potentially accepting a proposal in one of the season’s final episodes.

Sensing how crazy this must all sound now after the fact, Randolph chimes in,

We guess when it’s all said and done, everyone’s getting along just fine! The duo says they currently spend a lot of time together, and see each other at least once a week.

Related: The Next ‘Bachelorette’ Is…

Before letting the couple go, Kimmel presents the couple with an engagement ring from Neil Lane, because what’s a Bachelor happy ending without one right? He explains:

Wow. Despite turning the show’s formula on it’s ass, these two still ended up with other and got all of the perks, too.

We can assume this is also ABC‘s low-key way of pushing Cassie and Colton to actually get engaged, making their epic love story truly complete.

WATCH their whole conversation (below):

What do YOU guys think of Colton and Cassie together? Do you think they’ll last?

Sound off in the comments (below)!

Late night hosts did NOT have mercy on Lori Loughlin nor Felicity Huffman on Tuesday night after news of that nationwide college admission bribery scandal broke.

As we reported yesterday, the Fuller House actress and Desperate Housewives star were two of the many who were charged in a massive bribery scam involving elite colleges across the country.

According to police, Loughlin and her husband Mossimo Giannulli paid $500,000 to have both of their daughters recruited for the crew team at USC, despite the fact that neither actually played the sport. The family was also supposedly accused of staging separate photos of their daughters on a rowing machine.

Huffman reportedly donated $15,000 to place her daughter in an SAT cheating scheme, which allegedly involved a proctor at the test taking center to correct her answers afterward.

While rich folk making charitable donations to get their kids into elite schools is not at all shocking, the fact that the wholesome Aunt Becky was caught doing it was something late night hosts couldn’t pass up.

Trevor Noah, Jimmy Kimmel, Stephen Colbert, and James Corden had a field day making Full House and Desperate Housewives jokes while breaking down the scandal Tuesday night. Noah, for one, was baffled to learn about Loughlin’s bad behavior. He joked on The Daily Show:

“I’m so disappointed in you, Aunt Becky. I expected this from a Desperate Housewife but you?!”

But other hosts weren’t as surprised…

On The Late Show, Colbert reminded us about the other “notorious scheme” Loughlin was involved in years ago, joking:

“Loughlin was part of a notorious scheme where they made a pair of twins pretend to be one person. No one knew, no one knew! Millions of dollars ripped off.”

Kimmel, meanwhile, predicted that Loughlin “could be the ‘Becky with the good hair’ that Beyonce warned us about” on her Lemonade album. He then used the scandal as an opportunity to roast his longtime nemesis, quipping:

“I knew there was a reason Matt Damon got into Harvard… It didn’t add up.”

Corden also got a Full House jab in on The Late Late Show, joking that it “looks like Aunt Becky could be going from Full House to the big house.” Zing!

“I gotta say I think something like this could really hurt Hollywood’s reputation.”

But the best of the burns definitely came from Late Night‘s Seth Meyers, who viciously joked that the scandal was “the second worst thing Lori Loughlin has” done, referencing Netflix‘s critically panned Fuller House.

But with all the heavier scandals going on these days, it’s hard not to appreciate lighter, hilarious ones like this!

Watch all the clips (above) and get your giggle on!

Lady GaGa is totally aware her Oscars performance with Bradley Cooper — which sealed the deal for her Best Original Song win on Sunday — was sexy as f**k.

Related: Did Irina Shayk Really Unfollow Gaga On Social Because Of Her Oscars Performance With Bradley?!

So when the performer stopped by Jimmy Kimmel Live! on Wednesday, she had to spill all the deets AND address relationship rumors that have been running rampant since the steamy televised moment aired. Not only was their on-camera connection analyzed, but the pair was reportedly spotted getting super cozy at parties following the show, as Bradley’s baby momma Irina Shayk looked on!

Fully knowing lust was in the air, GaGa shared with Jimmy Kimmel:

“Yes, people saw love and guess what? That’s what we wanted you to see.”

“[Shallow] is a love song, A Star Is Born is a love story. It was so important to both of us that we were connected the entire time… When you’re singing love songs, that’s what you want people to feel… I’m an artist and I guess [Bradley and I] did a good job… fooled ya!”

Fooled us is an understatement!! All of this happened AFTER we reported the duo was looking like a legit couple at a pre-Oscars party on Friday night! 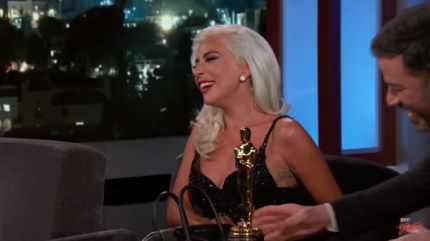 This week, MANY celebs also shared their thought’s on the co-star’s undeniable chemistry including the actor’s ex-wife Jennifer Esposito, David Spade, and Mel B. We can’t help but think Lady GaGa’s breakup with fiance Christian Carino only stoked the flames of a rumored romance, but we digress.

Back to the interview, the triple threat went on to detail the intense Academy Awards performance prep, which was completely Bradley’s vision — including nailing the live singing:

“Bradley is a musician. My favorite thing about the whole experience — I was so excited for everyone to see him sing live… In that moment when we started and he said ‘Tell me something, girl,’ the audience started cheering and I was like, ‘Yes Bradley! Keep going!’”

GaGa shared that a new cut of A Star Is Born will premiere in theaters Friday! This updated version of the film has 12 minutes of additional footage and includes a new song! It plays for one week.

Watch the full juicy interview (below)! And SOUND OFF in the comments with your thoughts on the rumored romance!

When given the choice between a second round of Kimmel in 2018 and no Kimmel and no host whatsoever this year, a few million more people chose no host.

According to a new report, ABC is offering guarantees to advertisers for this weekend’s Oscars due to persistently low ratings in recent years.

Academy Awards Voter: Even I Won’t Watch the Oscars This Year

An anonymous voter for the upcoming Academy Awards told The Hollywood Reporter this week that he has no plans to watch the Oscars on television this year.

The One With The Emergency Landing! Jennifer Aniston & Courteney Cox Have Private Jet Scare!

Jennifer Aniston and Courteney Cox had a terrifying couple hours in the air on Friday morning.

According to TMZ, the former costars were flying to Cabo San Lucas for Jen’s birthday vacay when their private jet lost a wheel during takeoff!

That won’t keep the plane out of the air, obviously, but the tricky part is knowing you won’t be able to land correctly…

The jet was diverted from Mexico back to California where it had to spend some time circling to burn off fuel — having a full tank makes accidental explosions far more likely in the case of an emergency landing.

Finally they were given clearance to land in Ontario, CA — where the women got off the jet and right onto a new one! That takes guts, y’all!

There were reportedly 12 total passengers on the terrifying flight, including the Friends friends, Molly Kimmel and Amanda Anka (aka Mrs. Jason Bateman).

So glad everyone is safe!

The post The One With The Emergency Landing! Jennifer Aniston & Courteney Cox Have Private Jet Scare! appeared first on Perez Hilton.

Ben Affleck *wanted* to be his best Batman, but he apparently just “couldn’t crack it!” Watch the retired Dark Knight explain his decision to exit the franchise to Jimmy Kimmel (above)!

Nick Cannon Calls Out Jimmy Fallon, Jimmy Kimmel, and Sarah Silverman for Past Use of Blackface

Multi-hyphenate actor-rapper-TV host Nick Cannon went after comedians Jimmy Fallon, Jimmy Kimmel, and Sarah Silverman for their past use of blackface in a social media post this week, saying, “Tell the Jimmys to holla at me!”