On Tuesday night, the rapper told TMZ he is happy for the 25-year-old Saturday Night Live actor and the 45-year-old Underworld actress.

The 28-year-old, whose real name is Colson Baker, exclaimed:

In fact, the musician knew pretty quickly that the two had great chemistry.

When he spoke to TMZ outside the Laugh Factory in El Lay Monday night, the 23-year-old comedian had a message for Pete:

In regards to his relationship with Beckinsale, Rife explained:

“We dated for a year and it was… complicated. A lot of ups and downs, but she’s moved on and I’m hoping they’ve both found — or are getting out of it what they want to get out of it.”

Ultimately, he hopes the two are “both happy,” adding:

“I hope that it can build to where it’s an established, good relationship… Best of luck to both of you.”

Rife is best known for his appearances on MTV’s Wild N Out and Total Request Life. Interestingly enough, he knows Pete from the comedy scene, but said he hasn’t seen him in years.

As we wrote, on Sunday, Davidson and Beckinsale were spotted making out at a hockey game at Madison Square Garden next to Queer Eye‘s Antoni Porowski.

Not surprisingly, the whole thing created one of the funniest memes we’ve seen in a while!

In January 2019, Davidson and Beckinsale were spotted chatting it up at Netflix‘s Golden Globes after party, and in February, the two were seen holding hands as they left his stand-up comedy show in Los Angeles.

Back in October 2018, Davidson got out of a relationship with Grande, about three months after they got engaged. While the pop star has been open about their split on her album thank u, next, the comedian hasn’t been so public about the breakup, though he reportedly had some hurt feelings.

MGK and Davidson both appeared in this year’s Big Time Adolescence and The Dirt.

In January 2019, the two dudes sat courtside at the Pepsi Center, while they watched the Denver Nuggets beat the Charlotte Hornets by 13 points.

Lady GaGa‘s appearance at the 2019 Grammys has people talking… and NOT for the right reasons!

On Sunday, the A Star Is Born actress took home three awards at the big ceremony: including Best Pop Solo Performance for Joanne (Where Do You Think You’re Goin’?), and Best Song Written for Visual Media & Best Pop Duo/Group Performance for Shallow, her duet with co-star Bradley Cooper.

However, people couldn’t help but notice that the Just Dance musician attended the gala WITHOUT her fiancé Christian Carino!

To make matters worse, the 32-year-old didn’t wear her engagement ring (as seen above), leading many to believe that the couple broke up!

When fans noticed, they immediately voiced their concern on Twitter. They wrote:

Was @ladygaga wearing her engagement ring?

''Lady Gaga is wearing her engagement ring''
me: pic.twitter.com/d70HQN2t3S

Has anyone noticed @ladygaga is not wearing her engagement ring?! #GRAMMYs

GaGa was spotted with her rock at the Oscars Nominees Luncheon on February 4, and brought the agent as her date for the SAG Awards and the Golden Globes.

While Carino is currently following the songstress on Instagram, she is not following him… though it is unclear if she ever followed him in the first place.

As we wrote in October 2018, the artist — born Stefani Joanne Angelina Germanotta — confirmed her engagement at Elle‘s 25th Annual Women in Hollywood Celebration.

Fiji Water fires back at “Fiji Water Girl” over her lawsuit!

As we reported, Kelleth Cuthbert — who went viral after she photobombed celebs at the 2019 Golden Globes — sued the brand and its parent organization, The Wonderful Company, for allegedly creating an unauthorized marketing campaign based off her Internet fame.

According to TMZ on Friday, the company filed a counter lawsuit against the actress — whose real name is Kelly Steinbach — saying she’s “bitten the hand that feeds her.”

Related: Get These Golden Globes Beauty Looks For Less $$$!

Per legal docs, Fiji accused Kelleth of attempting to extort the company for half a million dollars, and said the motivation behind her lawsuit is to simply get more money.

While Kelleth claimed she never gave them permission to use her likeness for an ad campaign that included cardboard cutouts, they said they negotiated with her a legitimate $90,000 brand ambassador deal.

However, they claim she tried to go around the agreement by “suing the very company that is entirely responsible for providing her the opportunity and the means to capitalize on her fleeting 15 minutes of internet fame.”

Fiji also said it has video and photo proof of Kelleth signing her contract, though she said the company “pressured [her] into video recording a fake signing of a fake document to simulate Steinbach signing on as a Fiji Water Ambassador.”

The brand is asking for her lawsuit to be dismissed, and want damages for the canceled campaign.

Later that day, the model’s lawyer, Kecia Reynolds, responded to the lawsuit with the following statement:

“Kelleth will not be bullied by Fiji Water, the Wonderful Company, or its billionaire owners.”

Kelleth and her legal team reiterated their point that “she is legally entitled to damages and profits from the use of her image. Fiji Water’s complaint is meritless and Kelleth is confident she will prevail in court.”

Kelleth Cuthbert, a model who rose to prominence as the “Fiji Water Girl” during the 76th Golden Globe Awards, filed a lawsuit Thursday against the company that made her famous. In the civil complaint, Cuthbert, whose real name is Kelly Steinbach, alleged that Fiji Water created a “worldwide cardboard cutout marketing campaign” based on the unauthorized use […]

On Thursday, The O.C. alum — who attended Notre Dame High School in Sherman Oaks, California with the Mr. Robot actor — posted the awesome snap on Instagram.

Related: Rami Malek Sent His Headshots In Pizza Boxes As A Struggling Actor!

She added the caption:

“Hey @ramimalek where’d you get that gold chain? #tbt #oscarworthy#dontforgetthelittlepeople”

The Oscar-hopeful has already won a Golden Globe and a SAG Award for his portrayal of Freddie Mercury in the Queen biopic Bohemian Rhapsody.

See the pic (below): 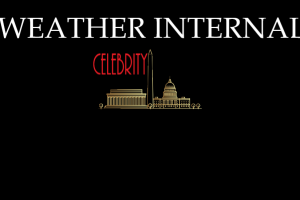 The “Fiji Water Girl” is biting the hand that pours!

As we reported, Kelleth Cuthbert went viral after she photobombed celebs on the red carpet at the 2019 Golden Globes, sneaking up behind everyone with her tray of Fiji Water bottles.

Related: Get These Golden Globes Beauty Looks For Less $$$!

According to The Blast on Thursday, the model — born Kelly Steinbach — is suing the brand and its parent organization, The Wonderful Company, for creating an unauthorized marketing campaign based off her Internet fame.

Via legal documents, Kelleth claims on January 7 (the day after the award show), the conglomerate “intentionally created cardboard cutouts of Steinbach for use in a cardboard cutout marketing campaign.”

Although she said the company tried to negotiate an agreement with her agent on January 8, someone had already seen cardboard cutouts of the actress the next day at a Bristol Farms in West Hollywood.

(The one above is from a Hollywood Pavilions.)

Not only did Fiji allegedly try to offer “gifts to entice” the model to sign away her rights, they “pressured Steinbach into video recording a fake signing of a fake document to simulate Steinbach signing on as a Fiji Water Ambassador.”

Her legal team said the document was not an agreement and was later destroyed by the viral sensation.

According to her suit, the brand knew no agreement existed but still used her image and likeness regardless.

The model — who believes she generated more than $12 million worth of brand exposure — wants Fiji to get rid of the cardboard cutouts… and is of course asking for monetary damages.

Do YOU think she deserves compensation for selling more Fiji??